So early this morning (aka 4am) I was studying up on an exam I had at 9:30am.  It was on Conflict and Humanitarian Assistance and part of the readings I was doing was talking about how in Afghanistan at the moment the countries involved in helping it "develop" are trying to implement Security Sector Reform (SSR) meaning helping to train the Afghan police, military, judicial system, etc., etc.  One section made a brief mentioning that the judicial system reforms are coming along horrendously as not only are the 3 main branches of the Afghanistan judicial system refusing to cooperate, but that their tensions are further aggravated by the United States and Italy, the two countries charged with helping to reform the Afghan judicial system.  Instead of trying to persuade the 3 branches of the Afghan judicial system to work together the US and Italy are involved in their own bickerings over how the reforms should take place as the judicial systems of these two countries are also very different due to traditions, culture, history, etc.
Now keeping in mind this is at 4am, all of a sudden my mind merged what I was reading with Hetalia and so trying to sit through my exam I had this little comic script of the US and Italia bickering and snipping at each other the whole time @___@  This is what resulted; 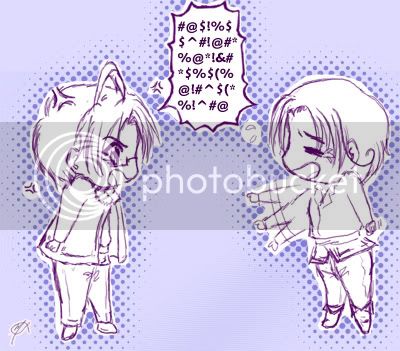 So I've seen a bunch of people on various communities asking how to make and lj-cute and/or how to tag entries. LJ has the FAQ you can always direct people to, but a) it doesn't have pictures/screencaptures which I always find more useful than trying to teach people html codes, and b)...well no 'b', just 'a', I like photos in my tutorials, lol.

So here we go, a quick and simple tutorial on 2 ways to make an lj-cut and 2 ways to tag your entries.